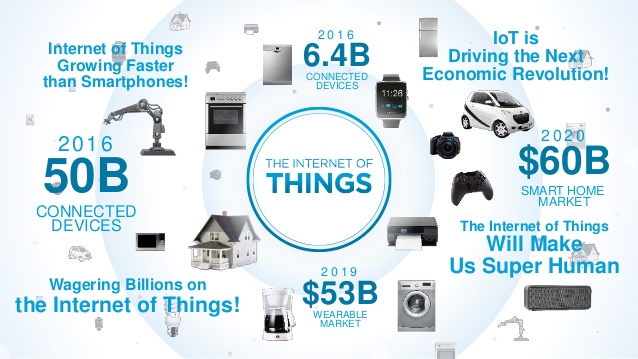 ‘IoT is bigger than you can ever think’

Other than typical fares including smartphones and computer, IoT connect devices such as cars or kitchen appliances to the internet. As years grow, things will grow, so more devices could be connected to the internet.

Internet of things: N/w of internet-connected objects used for collecting and exchanging data.

IoT devices: A standalone internet-connected device which can be controlled from remote location.

Physical layer: Hardware which makes up the IoT device.

Network layer: Responsible for transmitting data from physical layer to other devices.

Data storage: Where data from IoT devices is stored.

Networks: An internet communication layer which enables the entity to communicate with their device.

Numerous environments within the groups of consumer, government and ecosystem can benefit from IoT.

There are number of companies which are linked with Internet of things(IoT) today. Here are some major players:

They serve as bridge b/w device sensors and data networks. Following are some of the top IoT platforms in market today:

Many technologies in today’s time is enabling IoT,

Well, Products not always connect to each other. There are security issues which need to be addressed. The most significant issue is: compatible standards. If devices run on different standards, then, thee will be struggle for them to share and communicate.

Yet, IoT will have great impact in everyone’s life and it will help resolve simpler day to day issues – finding car parking places in busy areas, using fridge web cam for checking if you need more milk on way home.

‘The thing is it has potential to have major impacts on our lives, yet, we don’t know its exact use cases.’

IoT is growing at increasing rates and devices connected using IoT will triple up in coming years. It has its benefits, as well as certain implications.