BLENDER – It’s all about moving from 2D to 3D

BLENDER – It’s all about moving from 2D to 3D 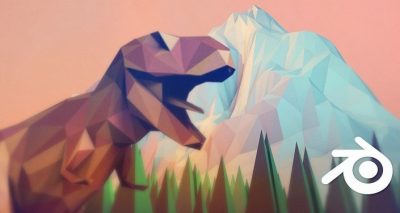 The question arises – Why go from 2D to 3D? Well, because in 3D we can move anywhere. We have absolute control over the object’s view (its depths or angles) for creating 3D games, unlike 2D where we are limited to move only left, right, up & down.

So, if you want to turn your experience from 2D to 3D, Blender game development is just another way. You may find learning it as pretty intimidating in the beginning, but as soon as you get the hang of it, you’ll start praising its niche terminology and an amazing interface.

Let’s get started with it………

Blender’s development was initially promoted in the year 1995 by Gaming company in Dutch(Netherlands). Ton Roosendaal is regarded as a founder of Blender games. Blender is a type of computer graphics software with a stable release 2.78 developed under GNU General public licence.

We now focus our concern on the most important part of Blender development i.e. 3D Viewport. It is a place where we can do everything from creating, adding or deleting objects, animating our characters, moving around our objects, using the interface to change Blender’s appearance, transforming objects as well as viewing them from different angles. All in all, it answers two main questions – How to actually navigate in 3D space? & How to actually interact with the objects?

To drive innovation, after every 1 or 2 years, Blender Foundation publishes open and creative Blender games. Some of them being – Big Buck Bunny, Sintel, Yo Frankie!, Elephants Dream, Tears of Steel, and many other.

In order to cover your basics in Blender at an in-depth, head around to these links: https://en.wikipedia.org/wiki/Blender_(software), https://www.blender.org/, http://www.creativebloq.com/3d-tips/blender-tutorials-1232739 .

Wrapping up, Now you know the basics of Blender , Right? You just know enough to begin your exploration into the area of 3D game development. So, leap forward and decide by yourself, where you are and where you want to go – on this amazing journey to 3D art.